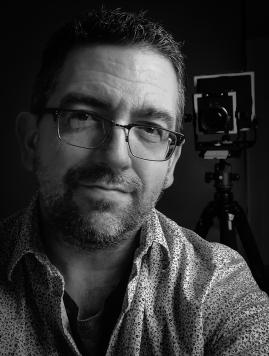 Like many other photographers, Gaetan Cormier was introduced to photography at an early age. He remembers using the Kodak Instamatic of his mother and also has memories of his parents peeling apart some black & white Polaroid photographs. This was magical for him.

It’s in the early 90’s that Gaetan got a hand on his first camera, the Pentax K1000. In an era where internet was not yet a thing, he subscribed to a home photography course offered by The Seattle Filmworks Photography School, which gave him the necessary tools to learn the basics of photography.

Somewhere around 2005, he acquired his very first digital camera. Being a very active storm chaser at that moment, he spent most of it’s time shooting storm structures and landscapes. In 2008, he discovered a passion for portrait/model photography.

In 2012, being fed up of shooting digital, Gaetan decided that it would be interesting to start using some film again, which he did occasionally and came exclusively to film photography in 2013/2014. He uses 35mm to Large Format cameras. Most of his film work until 2020 was made on medium format film, but since september 2020, his large format 4×5 camera is getting a lot more use.